Born and brought up in the Lake District, my love of the outdoors came early and naturally.  As soon as I completed my outdoor education diploma, I began working as a Trainee Instructor at the Ice Factor in Kinlochleven, Scotland.  Within 3 years, I was a full time free-lance instructor with an SPA and Summer Mountain Leader Award.  Next came my Winter Mountain Leader Award in March 2010 and my Mountaineering Instructors Award in July 2010.  Then, on the 15th March 2012, at the age of 25, I completed my Mountaineering Instructors Certificate.  This is the highest award obtainable in the UK.  I am now in the process of becoming an IFMGA British Mountain Guide which is the highest mountaineering, skiing and climbing award in the world.  Becoming a British Mountain Guide will allow me to work all over the world.

I have worked for both of our National Outdoor Centres - Plas y Brenin and Glenmore Lodge as well as the Military equivalent JSMTC.  Other outdoor providers that I have been privileged to work with include Abacus Mountain Guides, Moran Mountain, West Coast Mountain Guides, Skye Guides, Activus Outdoors, Mountain Motion, Point 5 Mountaineering and Mountains to Water.

I'm a member of the British Mountain Guides (BMG), which provides me with professional insurance and assists me with my continuous professional development.  I'm also a member of the Mountain Instructors Community which is a collaboration of independent climbing instructors who provide climbing and mountain skills to a high standard throughout the UK.  I am currently an Aspirant Member of the British Mountain Guides (BMG).  During this time I have worked for ISM, Frost Guiding, Alpine Guides and several independent guides.


My biggest passions are summer and winter climbing.  I have climbed in all major areas of the UK, though there are many more places to explore.  Alpine climbing has taken me up several North Faces including the Eiger, The Matterhorn, The Dru plus several others.  Further a field I have climbed in the Indian Himalayas and in America. 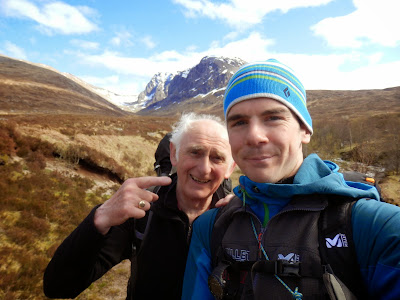 Thats me on the right, a great day at work with regular client Alan after climbing on the North Face, Ben Nevis