I feel as I am going through a little transition with this Alpine hit.  I'm starting to look forward to reaching for crimps rather than swinging into ice, walking in trainers rather than sliding on ski's.  It does feel a little premature as there is plenty of snow and ice in the mountains but maybe 4 months on snow is enough for this season.  Since leaving Scotland the trip has been fantastic.  I drove out to the Alps with my good friend Ben Cooling, he is a bit like a strawberry blonde Duracell bunny.  He wanted to do everything in the Alps!  We had 10 days before he returns home.  From leaving my mums house in Cumbria, we drove flat out to Dover, then non stop to the start of the Grand Paradiso Ski tour.  In 25 hours from leaving Cumbria, we had skinned up to the Sella Hut to start an amazing 6 day ski tour.


In the Sella hut we met Calum and Jamie who had the same idea so we joined forces and completed the 6 day tour together, driven on by Calums endless cheese related jokes!  I had been on this tour a couple of years ago but bailed due to bad snow conditions, this time I was keen to complete.  The tour started with some very difficult conditions, high winds and knee high sastrugi (wind erosion).  Word had got around that several teams hadn't made the summit of Gran Paradiso (4061m) so we hoped our attempt the next day would bring results.  Fortunately the wind eased, the clouds parted and the summit was there for the taking.  A brilliant day and a great ski down.  This was our high point of the tour, everything we did was slightly lower but we were blessed with fresh snow every night.  Each of the following days we had fresh tracks, Calum and I hit some sweet jumps and the final day completed the best week of ski touring I have ever done.  I can't wait to be able to do a week like this as work!
Great company, great condition's and a brilliant tour.

After our week in Italy, Ben and I headed to Chamonix to make the most of Ben's last 4 days.  We thought no need for a rest day, lets just get up high again and climb Supercoulior!  We were psyched, first in line for a lift up the Aiguille du Midi, we had ski's, climbing gear and some grub.  We also met up with Uisdean and Tim. All we needed is for the lift to open.  Guess what!...it didn't.  Damn it, we had to have a rest day.  New plan had to be formed!

We decided to make the most of the good weather by heading up to Argentiere Hut and having 3 days climbing from there.  We all made use of mechanical uplift and then went straight into the Frendo-Ravenell Gully (TD-) which was a brilliant 540m route with abseil descent.  Perfect for getting up to the hut in time for dinner!  The next day we all agreed on doing a 'Grande Course'.  Uisdean, Ben and Tim were keen for their first long tick and I was keen for my 7th so we opted for the 'Swiss Route' on Les Courtes.  A great day which only took up 5 hours as 2 roped teams.  When we returned back to the Argentiere hut to find that my ski boots, rope, cams and wires had been removed from the hut!  WTF!!  It turned out that my stuff had been scooped up by a film crew and taken for a helicopter ride down the valley!  I needed to get this back ASAP.  Fortunately the guardian of the hut lent me his ski boots and despite being a size too small, we still managed to ski down.  I retrieved my kit and with one day to spare before Ben fly's home, we headed up the Aiguille du Midi and climbed the Perroux-Proffit Gully (TD) before driving Ben to Geneva.  Despite a few hiccups, it all went well, we were active for 9 out of 10 days and had some fantastic days in the mountains. 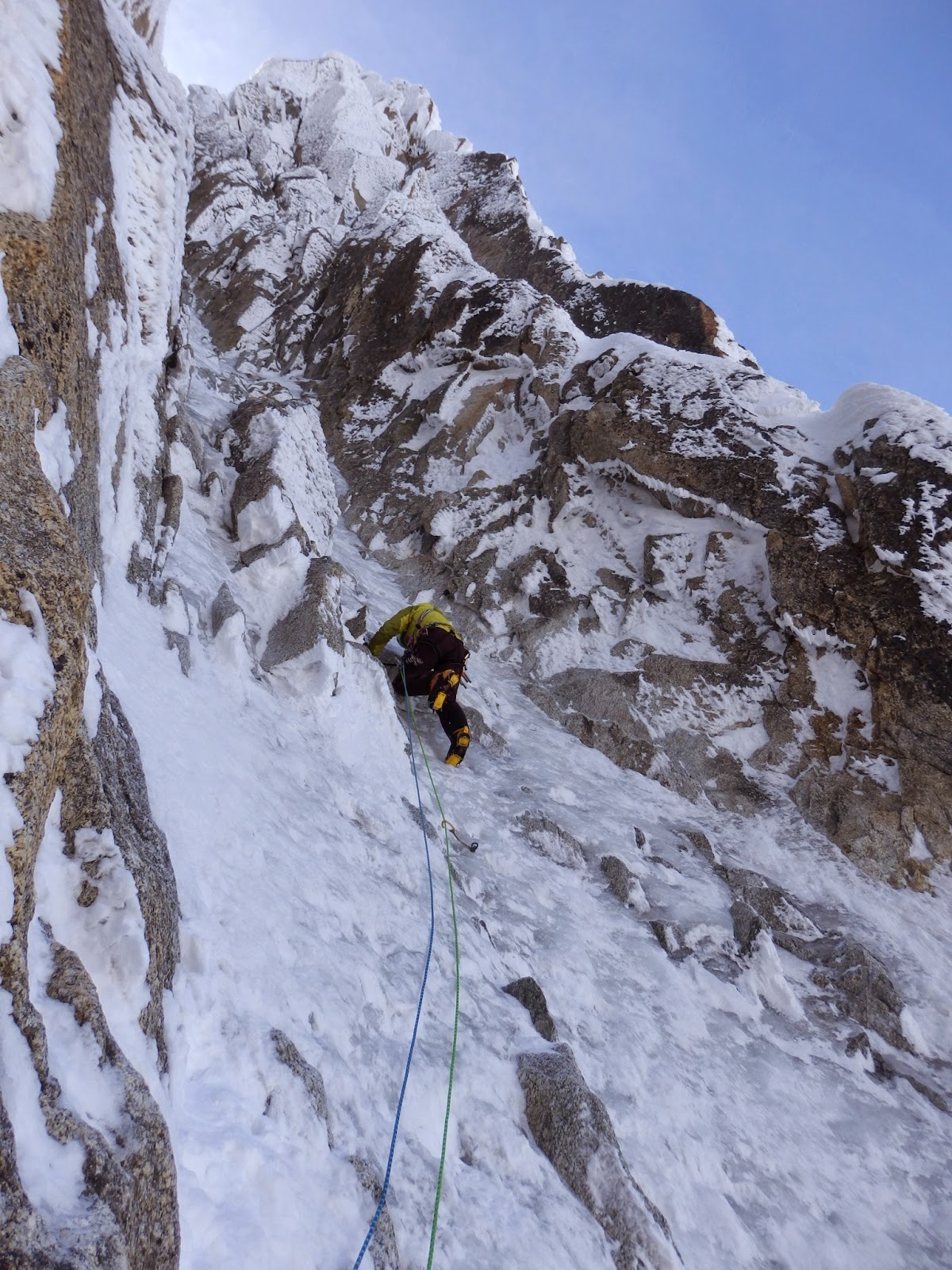 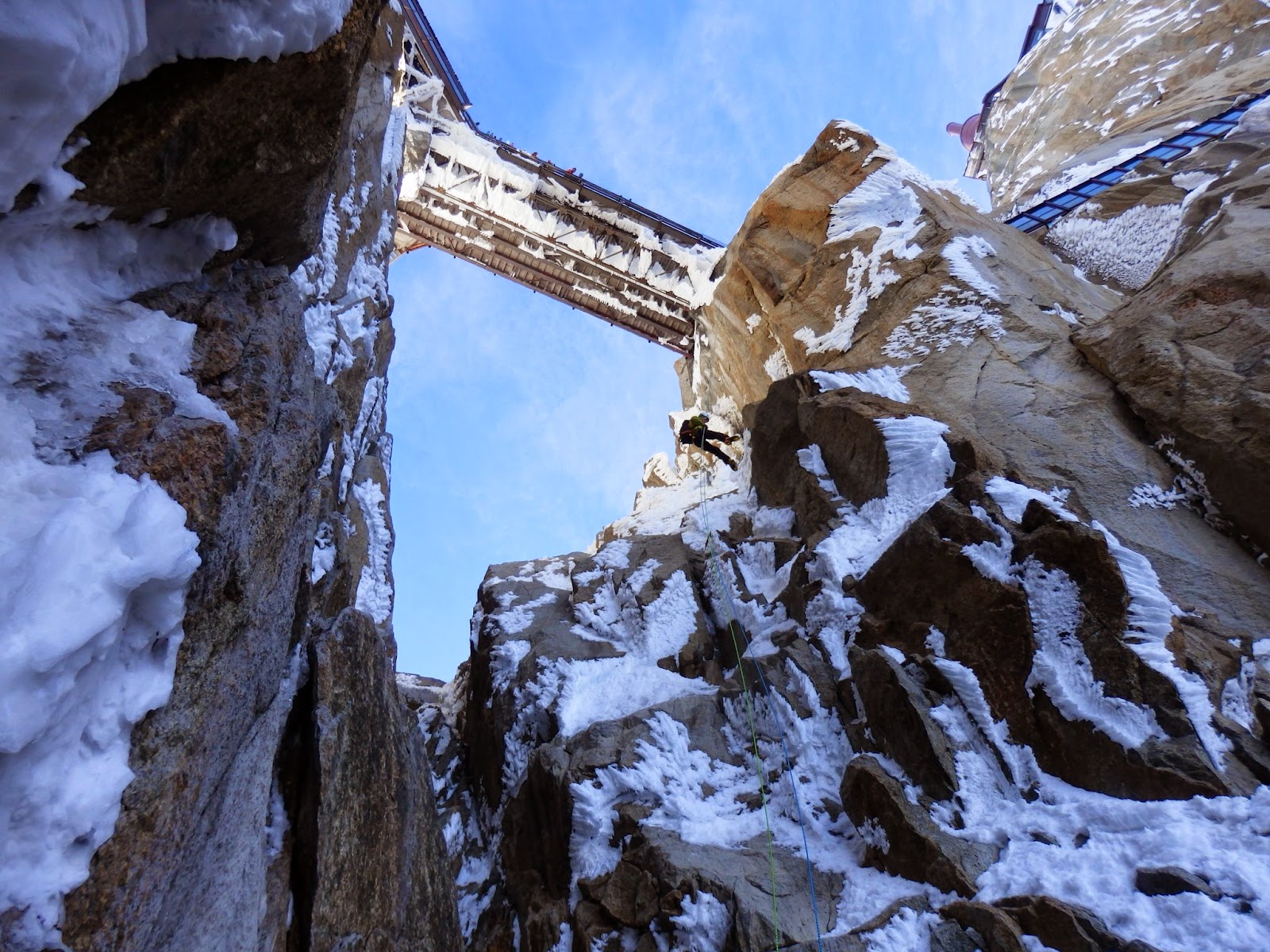 The following day Uisdean and I met up with Paul Swail and John Macune for a spot of relaxing sport climbing, to be honest we only did 3 routes as we were all pretty tired from the last few days.
For us all, it was back to the weather forecasts, back to the drawing board.  Our research showed that the weather looked good so John, Uisdean and I planned for an ascent on the Colton Macintyre on the Grande Jorasses.  Surely 3rd time lucky for me on this North Face?!  We took the afternoon lift up to the Aiguille du Midi and skied into the face, carrying all out climbing equipment, bivi equipment, winter boots and plenty of food.  We dug bed space below the face, away from any fall lines, brewed up and settled for the night.  I remember thinking that this time I would make it to the top!  Everything was falling into place in the morning, we started on time and we were all feeling pretty fresh.  We made good progress into daylight and found ourselves at the midway point...at this point we hit our brick wall!  The 90 degree ice was cruddy snow.  No placements, no ice screws.  OK not to worry, lets take the harder variation...cruddy snow.  No placements, no ice screws.  I couldn't believe it!  Why does this face not let up for me!?  After several attempts we decided to call it a day, retreat back to our ski's, retreat back to Chamonix.  I knew this was going to be my last window for a big route on this trip and as I am writing this I am now on the wire...I want to climb another big route but maybe I will save it for another time, should I just go rock climbing or should I endure another big committing North Face...only time will tell!  Either way, I'm sure it will be fun. 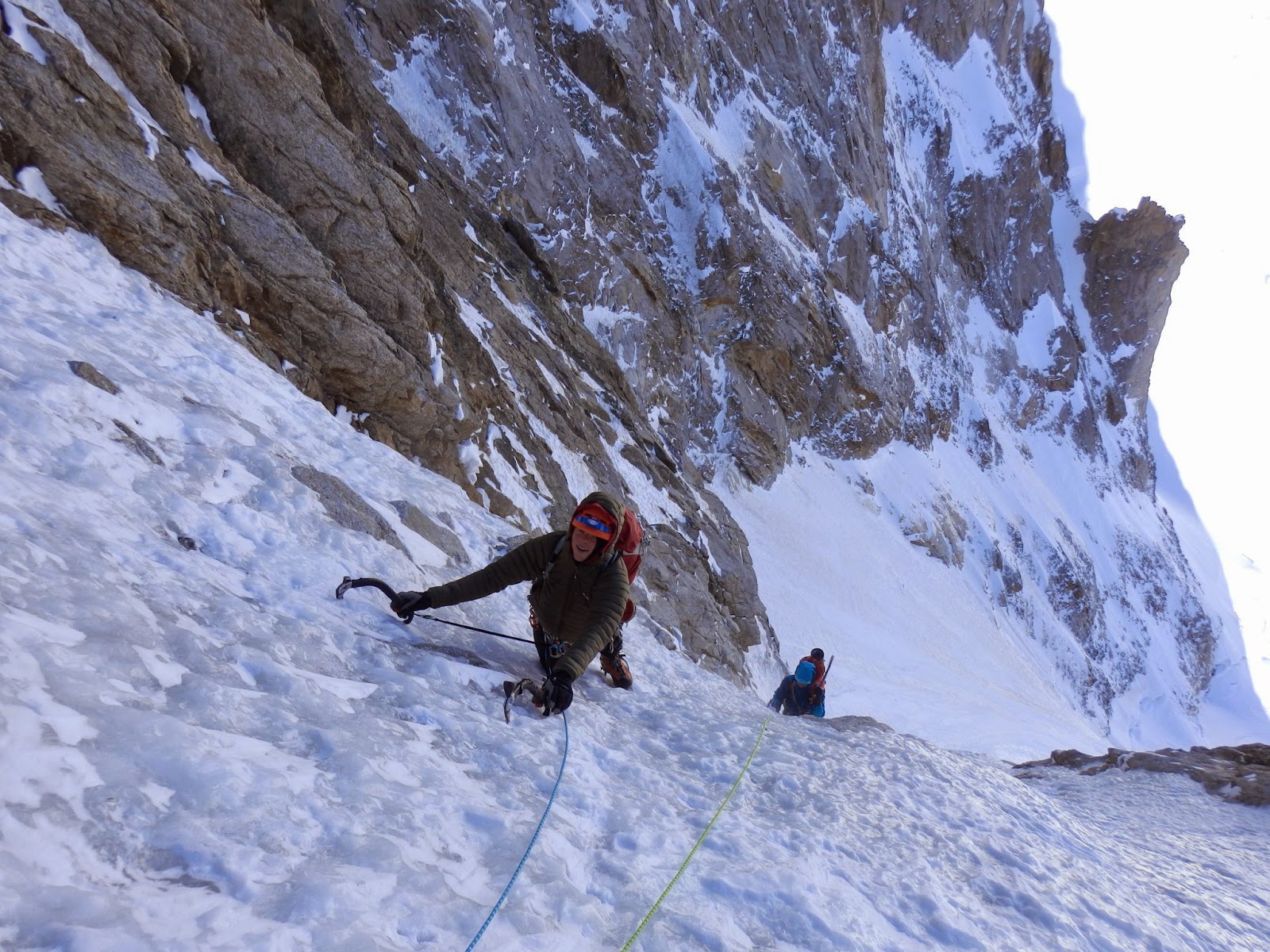 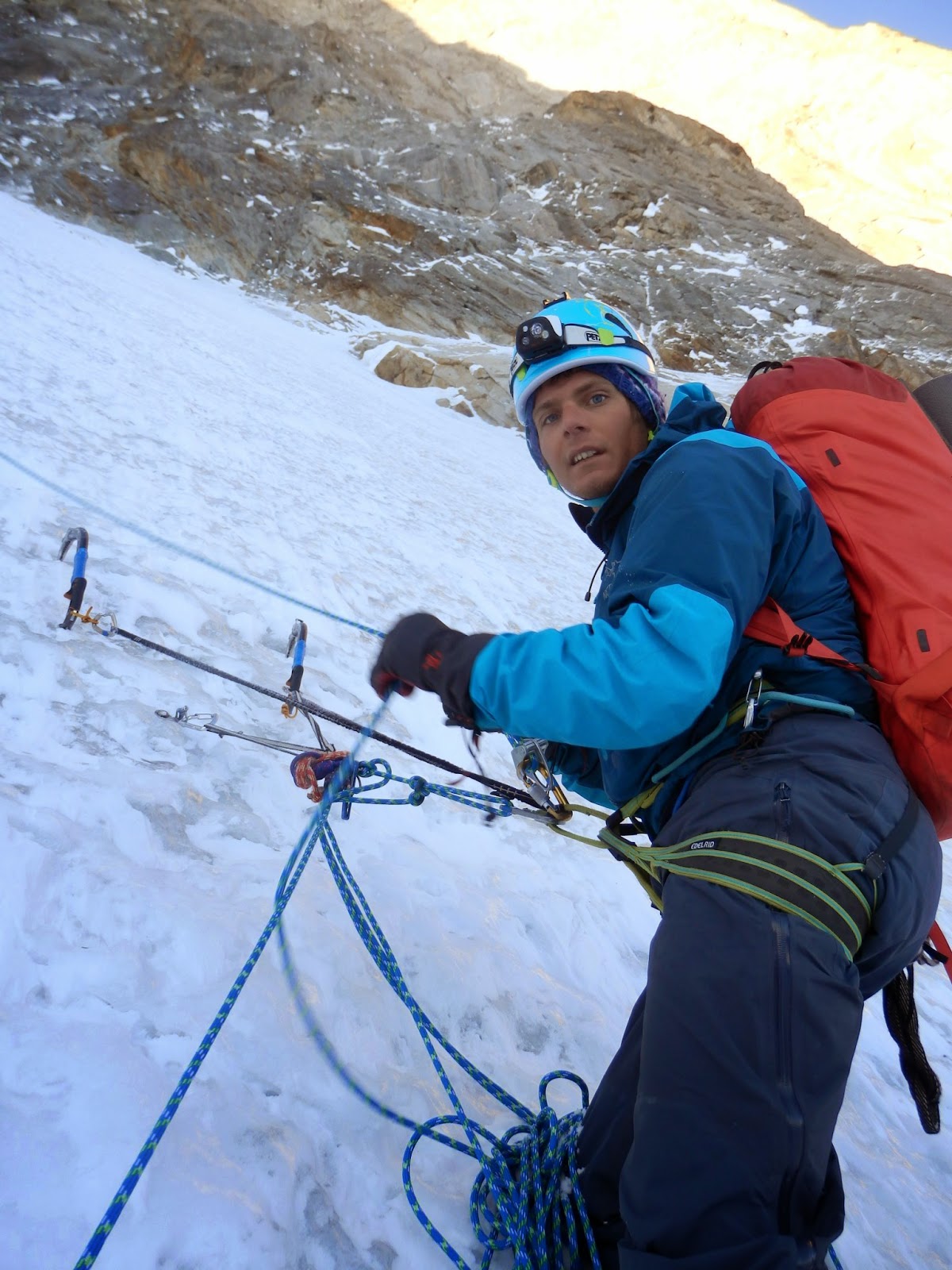 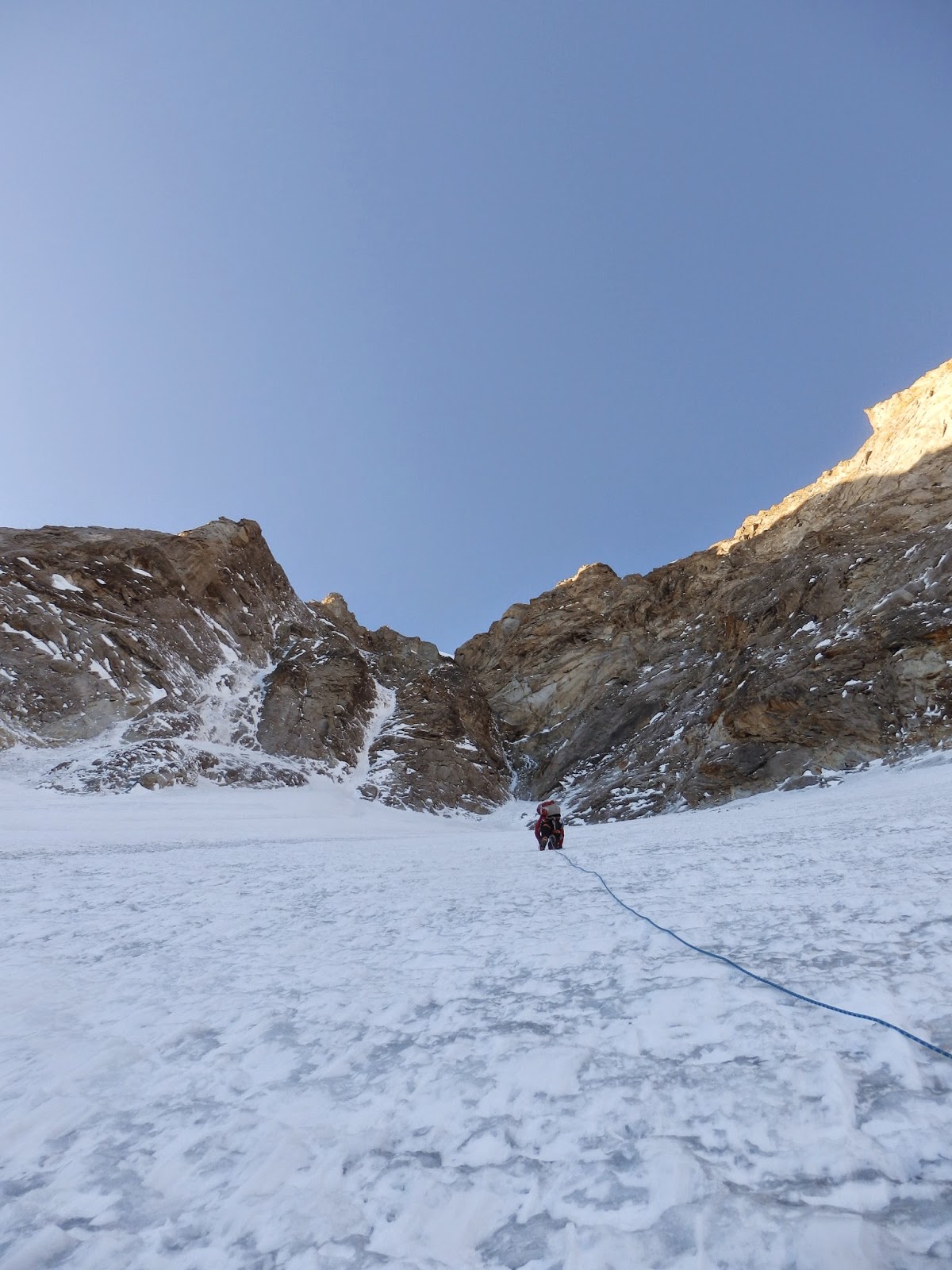