With it being mid January and not a great deal of winter climbing under my belt, I was fully prepared to drive up to the North West for some climbing with Murdoch knowing full well that it would be a quite hard day of climbing.  To my surprise Murdoch was very flexible with what we did and seemed to be happy to lower his grade to something amenable as I am essentially off the couch.
The plan was hatched to climb on West Central Wall on Beinn Eighe, a crag I have never done a route on.  Martin Moran was keen to join the ascent but after a bad nights sleep he decided against it.  So Murdoch loaded up our packs and headed off from the car at 5.30am chatting away as we had lots to catch up on.  We arrived at the abseil down the route Blood, Sweat and Frozen Tears (high on the to do list) and abseiled down to the ledge at the start of the routes.  We hummed and hawed about our two routes and eventually settled on the 2nd ascent of the winter line of Bruised Violet (hard VIII,8). It was to work out perfect for me, two grade 7 pitches and two grade 8 pitches.  I was keen for the 7's and Murdoch was more than happy to climb both the grade 8 pitches.  Everyone was happy.  I think we made pretty efficient progress up the route, the two hard pitches were really tenuous and fairly strenuous, certainly a shock to the system for me.  A stunning route and a great find by Andy Turner and Ian Parnell in a beautiful setting.  Cant wait to go back and climb some of the other routes there.
Uisdean and tom climbed Sundance which sounds amazing, another classic Beinn Eighe route that I would love to climb. 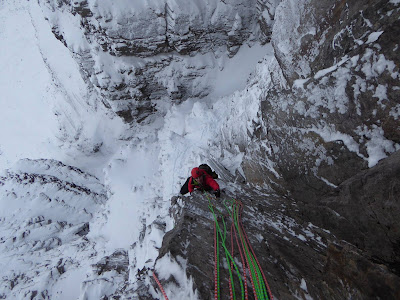 I left my camera behind so unfortunately no photos from me.  All from Murdoch's camera.