Last year I was approached by Martin Ross and his friend Brian as they had a burning desire to climb into the heavily vegetated but iconic feature in Glencoe, Ossians Cave.  As I had never climbed it, i was keen.  Last year I went and had a look on my day off and sussed it out.  On our attempt last year, both Martin and Brian were unable to join me in the cave as the climbing was too difficult but swore to come back again better prepared.


So this year they came back and they were much more prepared.  I suggested we went a little earlier (May rather than June) and if you're thinking of climbing into Ossian's Cave then I would do it before the vegetation becomes waist high!

Also Brian and Martin were noticeably fitter but neither had a great deal of climbing experience under their belts.  We lucked out with bone dry conditions...again...so the ascent was on. We came in via Dinnertime Buttress and Rhyolite Romp to get warmed up and made our way down to the cave.  I arrived at the base and clipped everyone to the in-situ peg at the base of Ossian's Cave and then climbed up the first pitch.  Mostly unprotected steep grass with dome dubious and slimy rock saw me at the belay.  The in-situ rope is core shot in many places but was used (yes - a point or two of aid) to both hold onto and to clip a runner into.  I also used an ice axe which was very useful.  The 1st belay is good.  An in-situ wire and peg and can be backed up with a purple Camelot and a bite of the in-situ rope.

Unfortunately Martin reached his limit climbing up and opted to be lowered down but Brian made a good ascent and joined me in the Cave.  The top pitch is easier and slightly better protected (Large wire and a better quality in-situ rope) and the belay is two expansion bolts...equalised and extended with all sorts.  We found the wee box, signed it and headed back down in two abseils (2x60m ropes).  It could be done in one but would have savage rope drag. 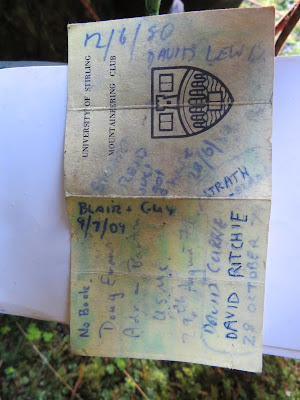 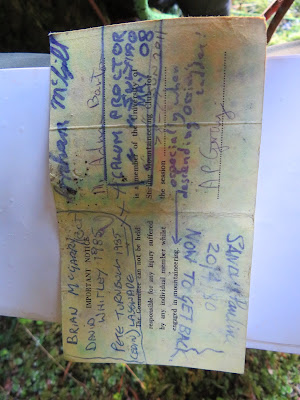 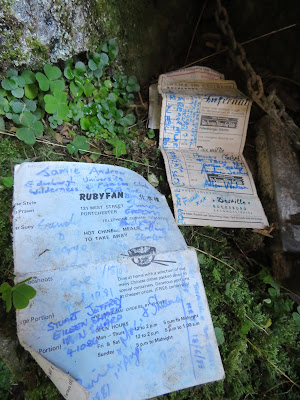 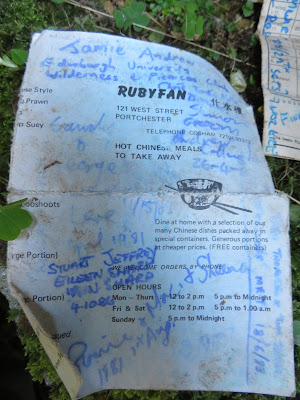 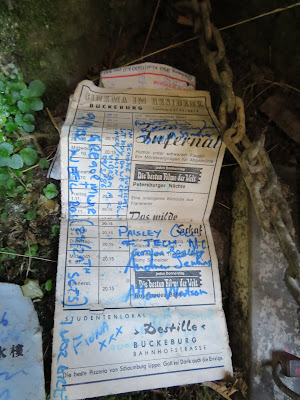