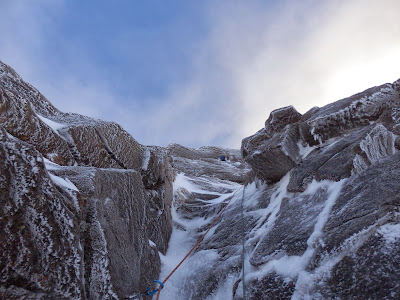 Great to be back in Scotland after a short break at home for the festive period.  The forecast was great for the East coast so I met up with Murdoch and Blair, who decided to join for a Jolly.  On arrival to Mess of Pottage we noticed that pretty much all the climbers from the car park came here too.  We went for plan F, Wachacha (VI,7).  It was an ok consolation but rightly not worth more than its one star.  I led the first pitch which had one hard move as did the second pitch which Blair led.  The crux of the route was digging out gear as everything had a nice layer of ice over it and the neve was just about weight bearing.  Ice was forming nicely in places on the Mess of Pottage.  Plenty of snow around Fiacaill Buttress, which had no climbers on, understandably, some climbed on fluted buttress and someone skied down the goat track.  On another note, the skiing looked great on the pistes.  More tomorrow! ;)

The rest of my pics here

A pic or two from Murdoch here