Skye ridge training in the Lakes 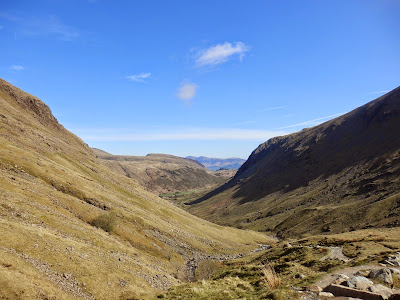 The last two days I have been out with Chris and Mick for a spot of preparation for the Cuillin ridge later this year.  The chaps were keen to see if they were up to scratch and had fitness levels to suit the two days on the Cuillin.  I had Jeremy along to shadow for the two days, a old school friend who is wanting to refresh his outdoor qualifications again. 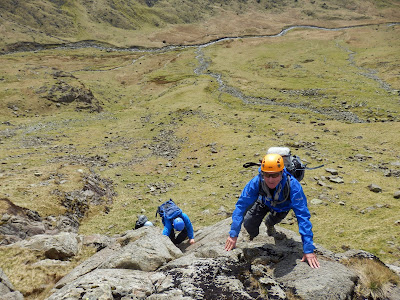 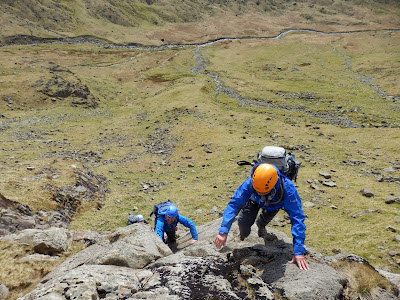 The plan was a two day trip with an overnight bivi but with a horrendous overnight forecast we decided against it and just went for two individual days.  I had been looking forward to these two days for a while now, despite growing up in the Lakes, I hadn't done a great deal of scrambling and the bigger hills.  This was a perfect opportunity to do this.  Mick knows the hills in the Lake district very well but has never really been off the beaten track or onto scrambling terrain so this was going to be new territory for him and Chris. 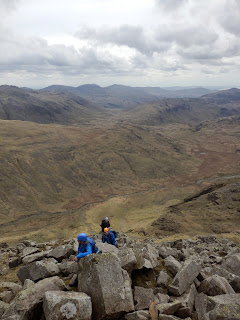 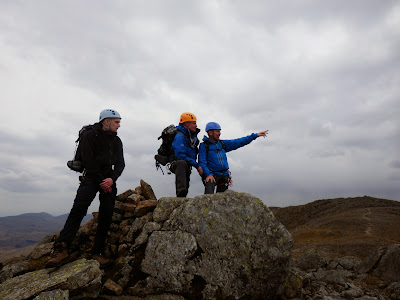 We met at Seathwaite in Borrowdale, welcomed by sunshine and light breeze, after a kit chat and check we headed off to the hills.  Our first point of call was Ill Crag (935m).  To summit here we headed up to Esk Hause (759m), and down to the start of the South East Face.  From the bottom we had a brilliant 500m scramble on some of the roughest rock I have touched in the Lake District.  With its sunny aspect, great length and options for variety at any grade, this was a fantastic scramble and I highly recommend it.  From the summit of Ill Crag we moved over Scafell Pike (978m), down Mickledore and onto Broard Stand.  Mick was very keen to do this as he has stood below it a few times contemplating it.  As an accident hotspot he was glad to have a rope on.  Fortunately we had it nice and dry and made it up to the summit of Scafell (964m) before descending back to Mickledore via Foxes Tarn, the walkers descent.  After we got off all the technical climbing and walking the heavens opened as expected.  Thumbs up to the forecast.  We donned our hoods, heads went down and we made our way down to the brilliant Corridor Route which lies on the NW slopes of Scafell and Great End all the way to Sty Head Tarn.  From here, we were back to a drenched Seathwaite, looking forward to cups of tea in front of the fire. 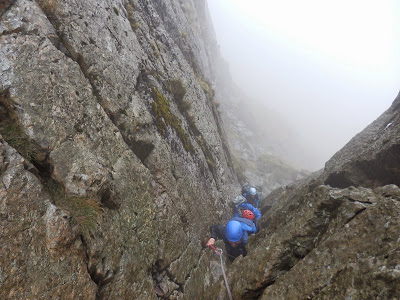 Day two consisted of a wet start and a dry finish.  After meeting again at Seathwaite we headed back up to Styhead tarn and this time headed west to Napes Needle.  We took the climbers traverse which had some interesting terrain to cover in the wet and was great practice for everyone.  We arrived at the needle and agreed that we should all do the classic Grade 1 and 'Thread the Needle'.  Classic it may be, on the day, E1!  Quite a contrast from Ill Crag, very smooth and slippy in the wet.  After threading the needle we stayed on the climbers traverse (we think) and continued scrambling, following our noses, weaving in and around the crag and ridges before questing up a gully, past Westmorland crag and onto Great Gable (899m).  On the summit, it was Saturday after all, were several teams, a couple thinking they were on Kirk Fell (1km away)....ooops!  After giving them some direction we descended into Black Sail Pass, over to Windy Col and back to Styhead Tarn and finishing our day back at Seathwaite.  Looks like Chris and Mick are ready for the Cuillin! 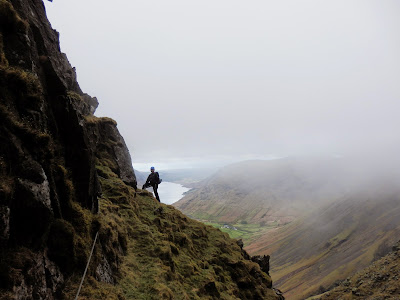 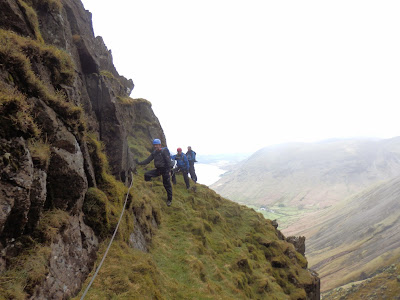