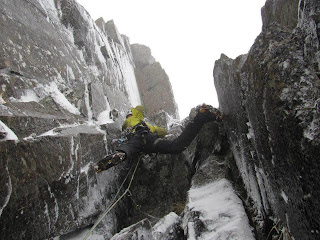 After another slog up to Stob Coire nan Lochain we found ourselves at the bottom of East Face Direct Direct (VII,7) after following some nice tracks from a team on Central Grooves. Central Grooves was our first choice but didn't fancy queuing, even though they did make a quick ascent. We did the route in 3 pitches, with John linking the first two which gave some hard sustained climbing on tenuous placements. This set me up for the 40m crux pitch which was very bold but on what seemed to be good hooks. After cutting loose a couple of times and doing pull ups on them I was happy they were secure. Phew. I was very close to being sick after exerting so much! Adam took the top pitch which was fantastic. Good hooks on a steep wall and pretty much always good footholds. A strong lead by everyone! Keith brought his clients up Ordinary Route, a team on twisting Grooves, Twisting Gully and Original route. Plenty of snow was falling most of the afternoon and temperatures were rising all day. Got a big soggy after a while. Forgot my camera today.
Posted by Guy Steven at 18:24