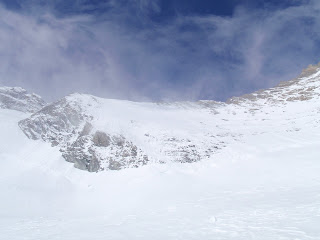 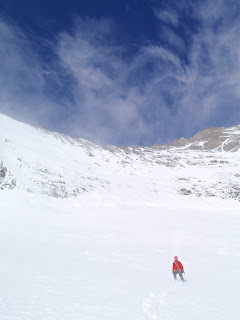 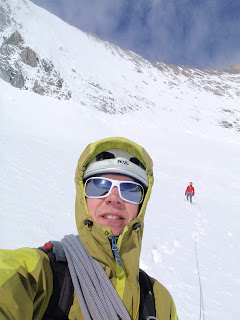 Today was another 3am start and we battled into the winds to get to the bottom of this 500m snow-ice route.  It is sustained at about 55 degrees all the way to the top.  After crossing the Bergshund we just kept the rope on and ploughed up to the top reaching the summit at 6am in very high winds.  The plan was to the press on along the ridge to Nadelhorn but as we were getting blown around we decided we should just down-climb the whole route...... so we did.  It was quite fun down climbing the route and was surprisingly quick.  We took only one axe each which was fine but with two axes you can really race up this (D) route.  Once back in the hut we packed up our kit, headed down to Saas Fee for some coke then drove over to the Grimsel Pass for some rock climbing.
Posted by Guy Steven at 23:57