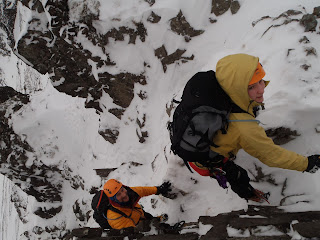 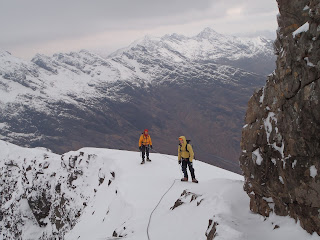 After yesterdays brilliant gully we wanted to have a change of scenery and get on top of a ridge for a little more exposure.  George has his Gold DofE expedition upcoming so he took the map and compass and navigated us to specific points that I pointed out on the way in.  I think he'll do just fine on his exped.  On arrival into Coire Lagan it looked stunning.  Snow covered tops, wind swirling snow into tornado shapes and not another soul in sight.  George hadn't climbed Sgurr Mhicconnich or done an abseil in the mountains so this was our objective.  Up the An Stac (screes) snow slope, up and over Mhicconnich, abseil down Kings chimney and down Bomb Alley back into Coire Lagan.  Conditions were great on the ridge, not quiet as good as when I did the winter traverse but still great.  We encountered some fantastic mountaineering with some very exposed snow arêtes and fantastic views across the Cuillin.  A great 3 days out with Julian and George.  Its really nice to get away from the honey pots and explore new areas.  On our descent just below The Great Stone shoot we heard shouting and spotted 2 guys at the top of An Stac (screes) snow slope waving an orange bivi bag.  They clearly needed help so I packed my bag with all my kit, briefed George and Julian and then shot up to see what was going on.  Fortunately neither of them were injured but they were pinned on the ridge with no axe or crampons, unable to move.  I chucked a rope round them and 9 stompers later they were lowered back onto walking terrain. They followed us out as they didn't have head torches either.  I'm sure they will always carry axes and crampons in the future and hopefully a head torch!
Posted by Guy Steven at 18:30