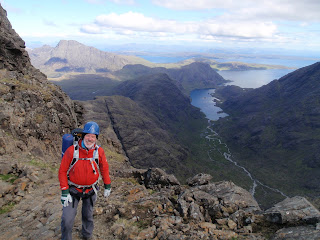 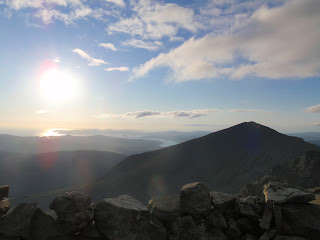 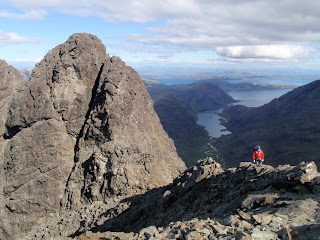 Over the last two days I took Brian for his second attempt on the Cullin ridge Traverse. Last years attempt he got as far as An Dorus heading South to North. This time we went from North to South so we could cover the Munro's he hasn't done and if we don't complete it then Brian will have done the ridge in two overlapping halves. We made good progress reaching Sgurr nan Gillean via the South-East ridge, after helping two chaps who were in a spot of bother, crag fast with out a rope. We got down the west ridge before the crowds, looking back from the top of Am Basteir we could see there was now a traffic jam. We were moving well, off Am Bastier, over Bruach na Fraith where we saw a load of rucksacks buried with rocks, I presume to stop the pesky Ravens getting their lunch. Going over An Caisteal and Bidein Druim nan Ramh we passed several teams who were doing the ridge traverse, all looking tired after the distance they have covered. We reached Brians 'high point' from last year, Sgurr a Mhadaidh and passed through An Dorus up to Sgurr a' Ghreadaidh, our final peak for the day. We dropped down to the col below Sgurr Thormaidh and set up for the night. A good 10.5 hour day! 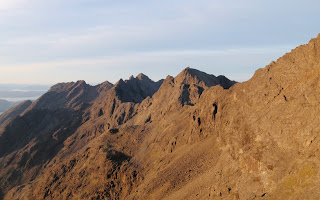 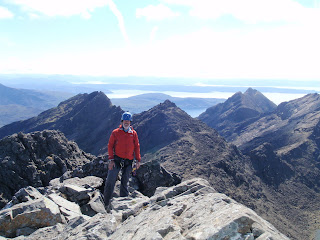 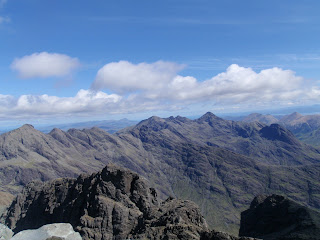 4.30am alarm clock woke Brian and I up and after a brew and some food we were on our way by 5.15. Our first port of call was the Inn Pinn via Sgurr na Banachdich. We were on the summit on the Inn Pinn at 7am, we had the whole place to ourselfs and we had fantastic views of the whole ridge. We next headed over to Sgurr MhicChoinich, then back tracked to Collies Ledge before making our ascent up the highest peak, Sgurr Alasdair. From here we abseiled down in to the TD Gap and climbed out the other side before heading over to Sgurr Dubh Mor. Unfortunately time was getting on and we had been on the go for many hours and Brian was happy to call it a day. He felt to tired to carry on and then walk out. So we headed down to Loch Coir a' Ghrunnda and back out the Glen Brittle for and ice cream and a nice cold drink. We were very luck to have fantastic weather for the two days, we even got a little snow flurry! Overnight it was very cold, frost all over the bivi Bags in the morning! We did 9 Munro's in total and spent 12 hours on the go on the second day cumulating to 22.5 hours on the hill. Great effort Brian!
Posted by Guy Steven at 19:30