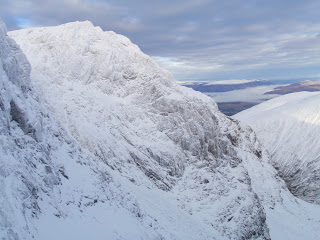 Today I was back out on Ben Nevis, I was working with Allan.  We've had quite a few days out now and this is our second day out this season, first being North East Buttress before I disappeared to Spain.  Today was different for Allan.  He had some new axes!  He has purchased himself some Petzl Quarks and what a difference they made to his climbing.  Going leash-less with lanyards was a major highlight for Allan and he loved how they just stuck onto everything.  We climbed Thompson's Route (IV,4) as a mixed climb (more like IV,5 today) as the 1st pitch has no build up of ice yet.  Allan had this route on his tick list for a while as it is a real Ben Nevis classic but also as his last name is Thompson.  We had planned to climb the bulk of the route and abseil of without going over the top so we could get back before it got dark and have a nice leisurely day and it was a brilliant idea.  It gave us an opportunity to check out other routes for the future and watch some young wads (Boswell and Sim (i think)) try a new route.  Donald and Guy were on Gargoyle Wall, Jamie and Ken were on Lost the Place and a team on Ledge Route.
Posted by Guy Steven at 18:45