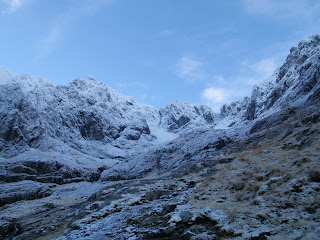 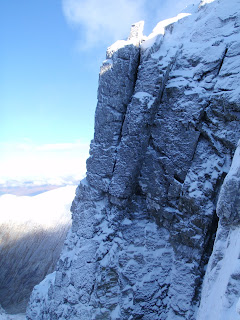 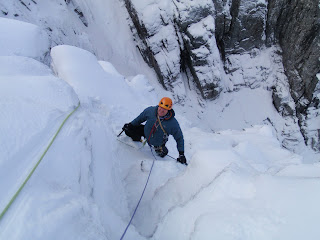 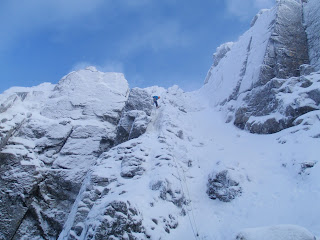 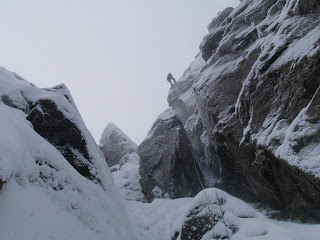 With a much colder forecast for today I was keen to head back up Ben Nevis and get another route in.  Yesterday I thought Gargoyle Wall would be ideal.  I have been wanting to do this route for years, I seconded the crux pitch when Kenny and I climbed Babylon but I was keen to do the whole route.  Alan was game for today, despite being hungover and ... well what other excuses he could pull out of the bag ... ;-)  The ground was firmer so the walk in was much easier, freezing level was quite low which was a good sign.  I set off on Gargoyle Wall (VI,6) but soon found that the rock was covered in a layer of thin ice, choking the crack's and making things tricky to protect.  So after running it out after a poor cam in an icy crack and with tricky moves coming up with a ground fall potential I thought it was too early in the season for this kind of behaviour.  So with my tail between my legs, I down climbed, found a thread and ran away.  We headed up Number 3 Gully, past Winter Chimney and found a small buttress.  On here we eyed up a line which gave us some nice climbing.  It was harder than it looked, (ended up being about V,6) managed to totally cut loose onto a single axe that was twisted into a crack, amazed that it held, gear was quite far below me, I managed to pull myself up and throw my foot up by my ear onto a ledge...great fun.  After reaching a belay, Al took over for the summit push on a nice little grade 2 rib which led us to the plateau   A slightly different outcome than expected but great fun to be out winter climbing with someone who took me out many moons ago when I knew very little about winter climbing.  Thanks Al.
Posted by Guy Steven at 18:28