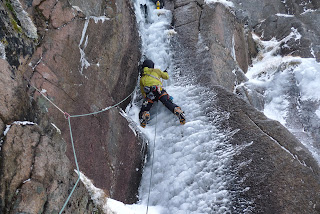 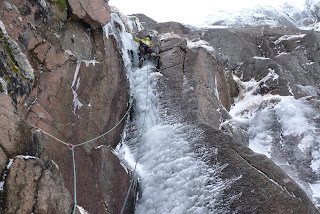 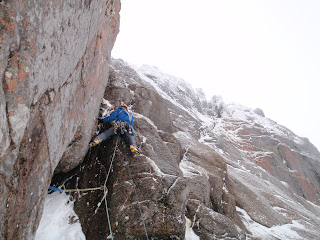 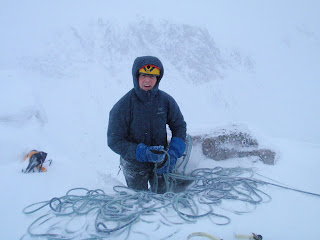 Today I was out over on the East coast for the first time this season as I fancied a shorter walk in and not so much steep ascent and descent.  (legs are still a bit tired from Skye).  I was really keen to do Sticil Face on the Shelter Stone and Blair and Dave were keen too.  Blair has done most of the climbing on this route but Dave had never been to the crag before despite winter climbing longer than I have lived!  Blair suggested we lead two pitches each which would give us all an easy pitch and a slightly trickier one.  I led the first and second pitch which was a brilliant thin ice smear.  We caught up with another team so after Blair led the 3rd pitch we decided to do the Direct Finish at the same grade of V,6 so we weren't on the heels of the other team.  Blair did another easy pitch and then Dave led us up to the top and back to the bag.  It was perfectly calm on the face but as soon as we topped out it was windy, snowing and cloudy and required a little bit of navigation to get us back over to the coire.
Posted by Guy Steven at 21:12