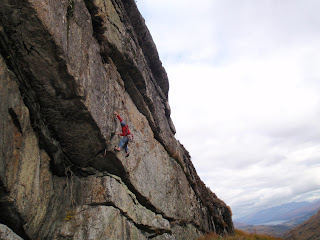 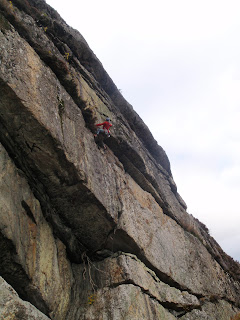 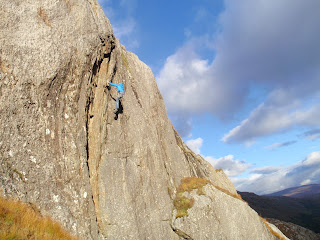 Another day off today so I met up with the two gingers, Donald and Ewan.  After yesterdays thrashing down at the Ice Factor with Donald, Ewan and Andy, I was pretty keen to do something that didn't require too much arm strength...a slab!  We agreed to head down into Glenfinnan and try (top rope for me) an E7 slab that a friend had done.  On the drive in we saw lots of crags that looked dry and Don Wan suggested we went to do some new routes instead.  So after a wander up the hill we picked a crag, with an imposing line and Donald set off.  He made great progress but got defeated by a wet and mossy crux so Ewan then had a go and managed to get through with some cunning.  So after all of this I had a go at seconding the route and cleaning the gear...with cold hand and weak arms, my ascent was far from clean!  After topping out Donald had spotted another line which he cleaned but didn't fancy a go today, wicked looking groove.
Posted by Guy Steven at 19:44