Today Donald and I left Ullapool and headed back up north to Stoer.  The forecast wasn't quite as good today so we opted to climb the Original Route (VS 5a).  Having never climbed a sea stack before I was pretty excited.  What I wasn't looking too forward to having to swim across to attach the ropes for a Tyrolean   Donald some how convinced me that I should be the one swimming, something to do with the fact that I'm younger?!  On arrival Donald stopped and said 'Oh No, bugger!'.  I thought about what it could be... wet rock, other climbers on it, covered in birds, fallen down.... No none of these, just an in situ Tyrolean   Looks like I don't have to swim!  Get in! 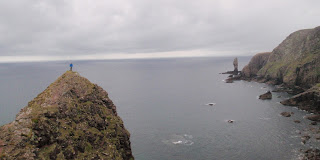 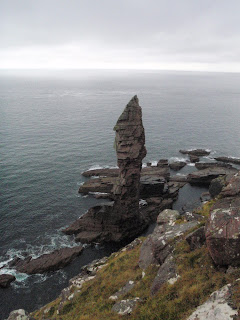 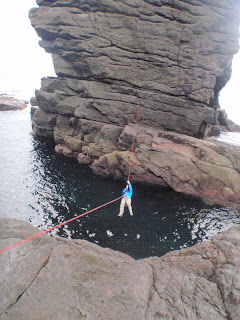 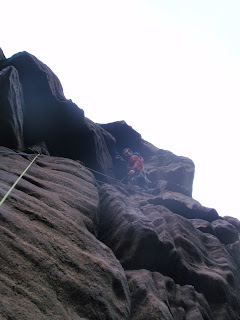 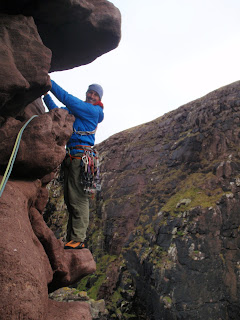 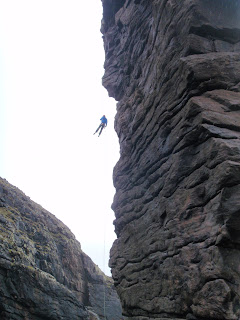 So we shot across the in situ rope and had a good look.  We could see it was pretty wet so the E2 was definitely out the question.  So 4 pitches of climbing done and Donald and I were sat on the top happy to be alive.  That was by far the hardest and scariest climbing we had done in the last few days.  Wet and slimy rock was not easy to climb and in some sections it felt very serious, not quite what we had expected on this classic route.  On the odd dry hold we encountered, the friction was brilliant on the Torridonian sandstone so on a dry day the route would be fantastic.  After a long, scary 57m abseil we found ourselves back at the Tyrolean and I headed across  failing to notice the tide had come in....  Donald almost wet himself laughing, I was just wet!  After I got over I re-tensioned the rope so Donald had a nice dry trundle across.  A great day in sub-optimal conditions.  The E2 looks brilliant for my next visit.  Drove back to Fort William to get the climbing gear washed and ready for tomorrow.
Posted by Guy Steven at 22:05