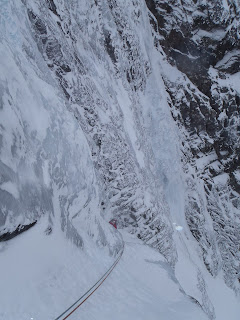 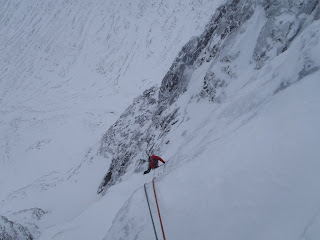 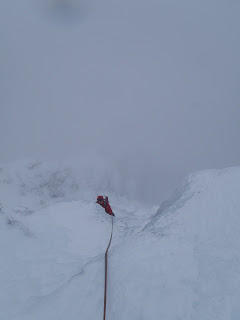 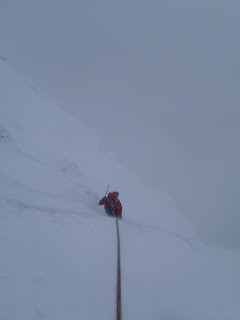 After yesterdays day off I was back in on Ben Nevis, this time with Simon.  He had driven up from Glasgow and after meeting him at 8am in Fort William we were at the bottom of our route just after 10am.  So many options to go for today, I had fancied Observatory Buttress as I was climbing near it yesterday and looked cool but with only one team on Orion Direct (V,5) we went for that instead.  The route was still in great condition.  I thought the crux felt a bit thin and with the screws were a joke but the rest of the route was amazing.  Big thanks to the team of 3 that let us scoot past them, it was nice to be making fresh tracks on such a classic route.  On the top it was full on navigation to the summit, into the shelter and we polished off a hip flask of whiskey before making our way down the tourist route, picking up a couple of chaps who had bitten of more than they can chew by walking up the tourist route in these conditions.  Lots of other teams out, all the Minus Gullys had ascents, Zero, Point 5, Orion Directissima, Tower Ridge, Green, Comb, Tim and Donald did Point Blank and i'm sure many other routes were climbed too.
Posted by Guy Steven at 20:32