Back out with Alan today who has had a good old rest after our day out on Monday.  Blue skies, cold temperatures and light winds was what everyone in Lochaber woke up to. It was great to be out climbing a frozen waterfall.  I have never climbed this well talked about route.  Named 'Smoking the White Owl' (IV,4), it was a great route on water ice which had some really good climbing and some tricky pitches. Last week I heard that there were 10 teams on the route which would have been carnage, on arrival to the climb we had the whole place to ourselves and after a pitch, Al and his client turned up to make the most of the accessible ice route.  It didn't take long to climb the route so Alan and I enjoyed lunch at the gondola station watching all the skiers work their magic   The pistes look brilliant and they were pretty much deserted.  Many 'Saga' members around who have got the Gondola up for the 'mountain experience'.  I over heard one phone call where they were saying that they were half way up Ben Nevis....I didn't break the bad news to them but it was tempting!  More blue skies, minimal winds and amazing ice routes to climb tomorrow.  I think its going to be busy in the mountains over Easter! 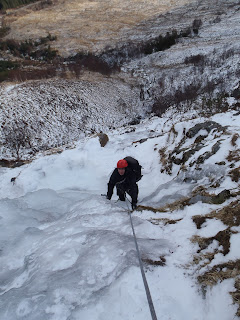