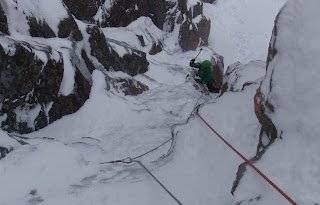 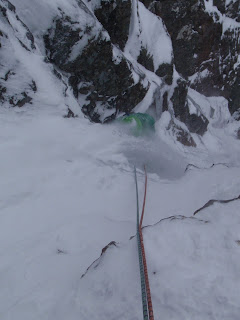 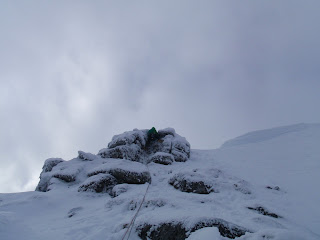 Today John and I froze our fingers off on the chair lift at Aonach Mor.  The pain was worth it as we were able to rest our legs a little bit by having a shorter 'walk in' day.  Johns third day on was all about ice.  We met Rich and his team at the bottom who were planning Right Twin.  That was good so we still had plan A all to ourselves   We were psyched for Left Twin (III,4).  Then, out of nowhere like some stealth giraffe, Mike strolled past us with sharp elbows and went for our chosen route!  All in good humour though.  Mike decided to abseil down the route so we decided to zip down Easy Gully and check out the rest of the routes.  This would give Mike a chance to get up a pitch.  So John and I built a snow bollard and abseiled in to find plenty of snow which was stable where we walked/waded.  There was plenty of ice forming on the Ribbed walls, nothing steep was quite there such as White Shark and Aquafresh but the mixed routes looked good.  Left Twin was in great condition with Siamese Twin nearly there.  There was a team on Stirling Bridge and I think that was it.  John led the last pitch up to the cornice via a nice little mixed step which Mike and his client put tracks through.  A fantastic day followed by some great soup and coffee in the cafe.
Posted by Guy Steven at 18:39