Tower Ridge - half summer half winter

What a difference a day make.  It was quite impressive to see how much had changed from yesterday.  Many ice smears from yesterday had disappeared  snow had retreated and plenty of water running in the river.  The Curtain had fully fallen down, Point 5 in now incomplete, Smiths route looks like it could barely take bodyweight, Hadrian's is in a coffin. Whilst we were climbing Tower Ridge, I couldn't see any obvious climbable routes except the usual's like some of the numbered gullys, and the ridges.  The thaw is doing some damage.  But not to worry, it will go cold sooner or later and it will be amazing again. 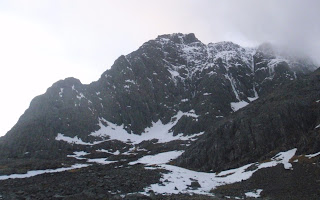 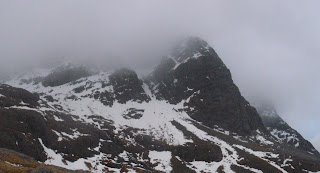 We still had a great day on Tower Ridge.  We donned our crampons half way up the Little Tower finding plenty of snow and ice which gave a reasonable purchase or came off very easily to expose the rock.  We were able to make good progress and reached the summit just as the forcasted rain came in at 3pm.  There was a team coming up Glovers Chimney which looked like a summer rock climb, a team climbed Number 3 Gully and lots of people having a wander around in the coire.  I'm going over to the East coast tomorrow to see what's going on (or falling down) over there.